Though it was not recommended, I signed up for the Advanced Course back in January 2010, forgoing both the Basic and Intermediate levels with the idea that I wanted to complete the whole program in as little time as possible. I went into it with a good knowledge base of many wines of the world, tasting techniques, and I had the drive to succeed in the class, and that’s what I did.

I found out mid August 2010 that I passed the Advanced WSET Exam with distinction (really, I’m not bragging, I worked very hard and deserved it… okay, maybe I’m bragging just a little). I thought about signing up for the Diploma Course immediately, but when I saw the financial commitment I had to make, let’s just say I wasn’t begging them to take my credit card. I requested to be a T.A., not only because I want to be as “hands on” as possible, but also because teacher assistants get a significant discount off the regular price. I was on the waiting list, and I was assured that I would not be able to be a T.A. this September for Units 1 and 2 of the Diploma class. I was disappointed but understood there were just too many people in line ahead of me. I took it as a sign that I just wasn’t ready to start the Diploma class right now and continued focusing on all the other good things going on.

The disappointment subsided due to all of my exciting life events this summer, and if it couldn’t get any better, I received a call last Thursday by Stephanie at the IWC asking if I still wanted to sign up for the class that starts Wednesday! Woo Hoo! What? She told me a few of the T.A.s dropped out last minute and a spot opened up for me! That’s great! I still had to sleep on it, because the T.A. fee was still not just a drop in the hat… but I know this is a great opportunity. I kept thinking of a quote my mom told me as a boy, “Do what you love, and the money will follow.” I called the next day and slowly read off my credit card numbers… I’m in.

Now I have to pick up my books and start all over. It will be a long process, but I’m taking the first step, well I guess technically this is the second… whatever.

Juggling studying, working on the blog, starting a new venture in selling wine (we’ll discuss that later), spending time with my new bride, and of course DJing will be a challenge, but I’m up for it. I will be forced to become more efficient and organized than ever before, and I am looking forward to it. It’s time to be a complete success. It’s time to build.

Thank you all for your support! Keep reading, keep commenting, keep sharing, and keep talking about how great Notable Wine is ;-).

This is just me practicing mountain diving… don’t try this at home! 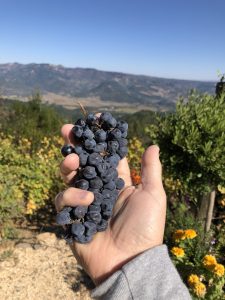